Welcome to the CCMS Theatre Community!

Culver City Middle School has an incredible Theater Arts program available to 6th, 7th & 8th graders!  There are TWO opportunities for 6-8th grade students to take Theatre Arts as an elective, in addition to the FREE after-school Performances program open to all students interested in performing in the school productions. 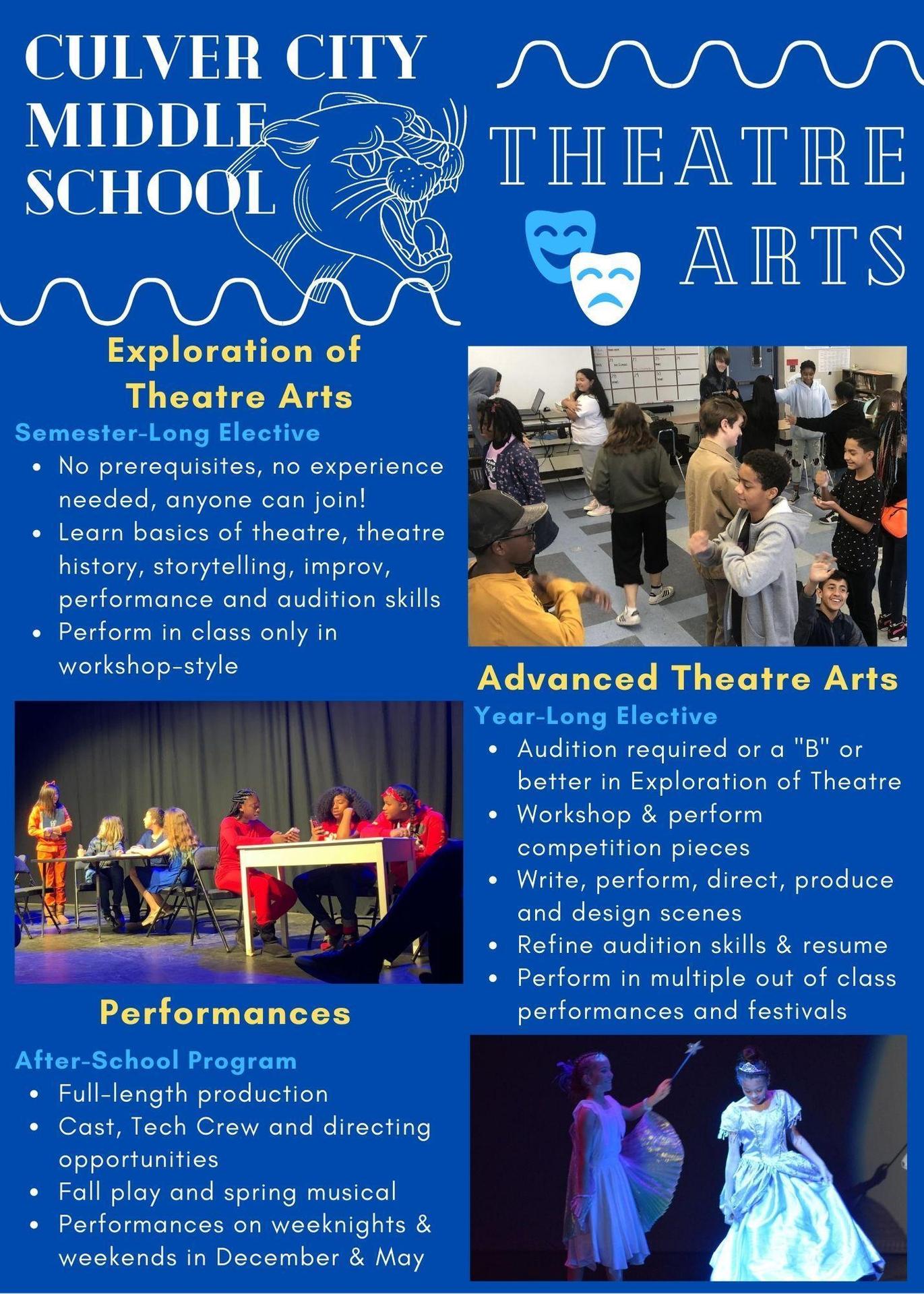 *Meeting will be recorded

Student Production Team Interviews on Thursday, January 27 from 2:30 - 4:30pm - This is for students who are interviewing for the Student Production Team only.  Please review the responsibilities and supplemental application information for each role.  If you have any questions, please reach out to Heather Moses at [email protected]

General Crew Application - If you want to be involved but are not interested in a leadership position, please complete this form and return it by Friday, January 28th.  Completed applications may be dropped off in the front office or emails to [email protected]

DRAFT General Crew Schedule - this will be updated with the crew leads, but it gives you an idea of commitment.  Assistant Directors and Stage Managers will need to be at all rehearsals.  See Draft Cast Rehearsal Calendar above.

Rebellion is nigh in Matilda JR., a gleefully witty ode to the anarchy of childhood and the power of imagination! This story of a girl who dreams of a better life and the children she inspires will have audiences rooting for the "revolting children" who are out to teach the grown-ups a lesson.

Matilda has astonishing wit, intelligence... and special powers! She's unloved by her cruel parents but impresses her schoolteacher, the highly loveable Miss Honey. Matilda's school life isn't completely smooth sailing, however – the school's mean headmistress, Miss Trunchbull, hates children and just loves thinking up new punishments for those who don't abide by her rules. But Matilda has courage and cleverness in equal amounts, and could be the school pupils' saving grace!

Packed with high-energy dance numbers and catchy songs, Matilda JR. is a joyous girl power romp. Children and adults alike will be thrilled and delighted by the story of the special little girl with an extraordinary imagination.

Matilda Wormwood The hero of the show. She’s brilliant, resilient, creative, and kind, despite growing up in difficult circumstances. Her parents treat her poorly, but Matilda escapes into a world of books, which puts her reading level far above the other children in her class, and she develops a bit of magical power in an effort to defeat Trunchbull.

Eric A student at school with Matilda.

Amanda A student at school with Matilda.

Bruce One of Matilda’s schoolmates. He has the bad luck to get caught after eating Trunchbull’s cake.

Lavender One of the kids at school with Matilda. She is kind and bright (though not as brilliant as Matilda) and quickly decides that Matilda is her best friend.

Nigel One of the kids at school with Matilda. He is enthusiastic, sweet, and always in a bit of a panic. Mr. Wormwood Matilda’s father. He is egotistical, rude, and not very bright, not to mention a liar. Though Mr. Wormwood is not a good person and he is mean to Matilda, his harebrained schemes can be hilariously funny.

Mrs. Wormwood Matilda’s mother. Like her husband, she dislikes Matilda and does not understand why her daughter loves to read. Mrs. Wormwood is selfish, obsessed with her own appearance, and believes everything she sees on TV. Her dancing lessons with Rudolpho are the most important part of her day.

Michael Matilda’s brother. He is not very bright, though he is the apple of his father’s eye.

Escapologist A character of Matilda’s creation. Everything this character does is grand and exaggerated – he’s performing for the cheap seats!

Acrobat A product of Matilda’s imagination.

Miss Honey A teacher at Matilda’s school. She is kind, is generous, and really cares about the children despite her own desperate circumstances.

Agatha Trunchbull The quintessential terrifying tyrant. As headmistress, she runs her school like a dictator, making up arbitrary rules to suit her every whim and dreaming up creative punishments. Rudolpho Mrs. Wormwood’s self-obsessed dance teacher.

Sergei A customer swindled by Mr. Wormwood. Though he shows up looking for payback, Matilda has had quite enough of revenge, and Sergei lets the Wormwoods escape.

Enjoy some photos from our previous productions:

High School Musical Jr.
Hairspray Jr
Theatre Arts Electives
The Theatre Arts electives are a great way to participate in theatre during the day! Whether you want to learn how to get out of your comfort zone and get comfortable speaking in front of a class, or you want to challenge and refine your acting skills in preparation for auditions for AVPA at CCHS, another arts high school, or professional/community auditions, there's something for everyone!
How to Join:
Exploration of Theatre Arts (Semester-long)
Advanced Theatre Arts (Year-long)

The Performances program is primarily run after school with rehearsals twice a week and performances on weeknights and weekends. In this program students have the opportunity to perform in a play in the Fall and a musical production in the Spring semester. Students who prefer a role off of the stage also have the chance to participate in the productions through backstage crew work such as sets, props, costumes, hair, makeup and other technical theater roles. There are also leadership opportunities for student director roles in music, acting, and dance.
Rehearsals in the Fall will be Mondays and Thursdays from 2:30-4:30 pm depending on the rehearsal.